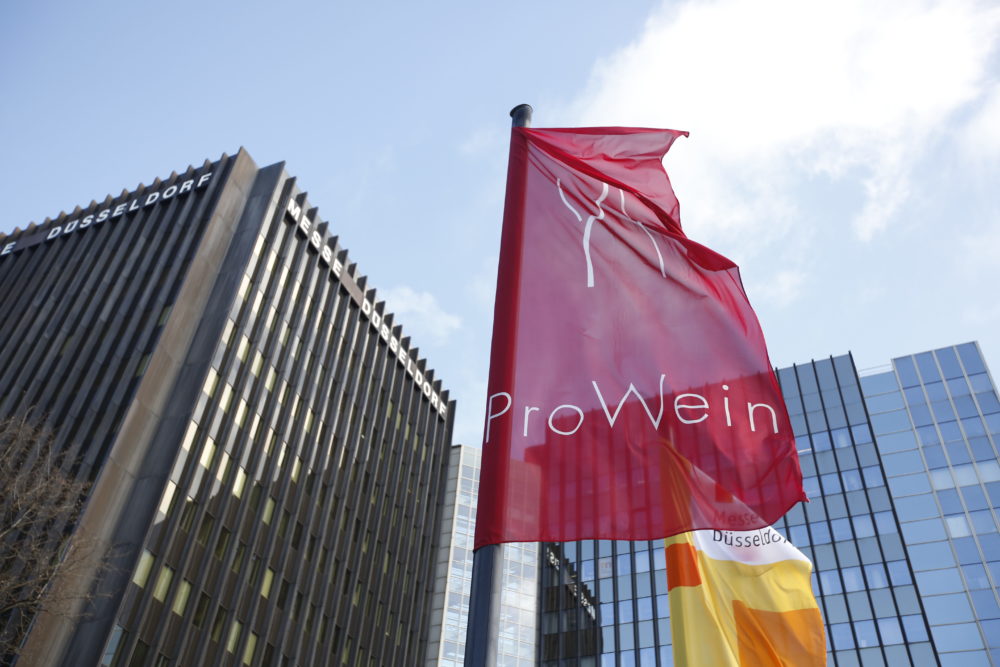 Commissioned by ProWein, Geisenheim University for the third time now surveyed more than 1,700 experts in the wine industry from 45 countries on international wine markets, marketing trends and the economic situation in mid 2019. This year’s survey focused on the effects of climate change on the global wine industry. The study covers the complete value chain of wine. The respondents include both wine producers (wine-growing estates, wineries, cooperatives) and intermediaries (exporters and importers) as well as marketers (wholesalers, specialist retailers, hotels and gastronomers). “It is especially this combination of the different perspectives of producers, intermediaries and marketers captured over several years that provides such a unique atmospheric picture for the international industry,” says Prof. Simone Loose, Head of the Department of Wine and Beverage Business at Geisenheim University, underlining the significance of the current Business Report. “This makes the ProWein Business Report the most comprehensive trend barometer of the wine industry worldwide.”

Summary
In the short term the international wine industry is faced with the challenges of health policy, the global economic situation and growing obstacles to trade. In the long term climate change confronts the sector with major challenges which have already been felt by actors over the past five years.

Grape and wine producers have so far been and will also continue to be hardest hit by climate change. They often only have few alternatives since they are tied to their vineyards in most cases. Through changes in viticultural practices, in harvest management, in oenological practices as well as through the use of irrigation the effects of climate change on grapes and wine are mitigated. For the future, it is anticipated that new grape varieties more tolerant to heat and drought stress will be in great demand. Beyond these adaption measures in existing wine-growing regions wine growing will increasingly shift to cooler growing regions in higher altitudes or further away from the equator. “All around the grape-growing world we can see the impact of a changing climate. Several wine companies have taken major commercial decisions on the basis of climate-related risks and opportunities, including divesting or acquiring vineyards based on their altitude, latitude and/or access to water resources,” emphasizes Dr. Dan Johnson, Managing Director The Australian Wine Research Institute.

The effects of climate change in wine growing affect all players across the complete wine value chain. Companies at the beginning and in the middle of the value chain have so far largely buffered most impacts. In future, however, these effects will be felt more strongly by marketers and consumers. Besides producers, the bottling wineries as buyers of grapes and bulk wine and exporters as intermediaries between international markets are affected most here by the risks associated with rising volatility of prices, quantities and wine qualities. Companies respond to these mounting risks by both closer cooperation with producers and by shifting to other producers and wine origins.

Wine industry players are seeing increased demand for improved sustainability in the sector. In addition to reduced water consumption the energy needs and therefore carbon footprint of wine production and distribution also have to be minimised. Furthermore, they are faced with the major challenge of also convincing consumers to buy sustainable wine. Uniform industry standards combined with comprehensive information and education campaigns could prove a solution here. “It is important that Climate Change is the central focus (independent of the wine category) of this well-made ProWein Business Report 2019. We must reduce our emissions drastically and more action is needed on all levels. Every company should have a decarbonization program in place, but the key-word is ‘Taking Collective Action ‘and wineries should set an example and lead. The new initiative IWCA (International Wineries for Climate Action/www.iwcawine.org) makes the collaboration between wineries regarding climate change easier. Hopefully IWCA will be a trigger for other wineries to join, to accelerate or to start the implementation of carbon-emissions-reduction-programs”, underlines Miguel A. Torres, President and 4th generation of Familia Torres. “The great interest in sustainability shown in the report confirms our own observations on the Nordic market. Organic certified is one example of how sustainable products are communicated to customers. However, we welcome a complement to organic, addressing a wider scope of sustainability issues through national and regional sustainability certifications that are now established in many countries,” underlines Marcus Ihre, Sustainability Manager Supply Chain at Systembolaget.

The economic expectations of the industry have dipped on the one hand due to business cycle challenges and trade barriers. On the other hand, the marked decreases experienced by producers are symptoms of the economic effects of climate-induced highly volatile grape yields and the resulting prices. Further adaption to the effects of climate change present the wine industry with major challenges. It is therefore also very much in the interest of the wine industry to jointly counteract climate change by efficient sustainability measures. “To reach the COP 21 targets quick and courageous re-thinking is needed. Every industry and every nation is called upon to change their mindsets but especially the wine and spirits industry has the possibility of positioning itself as a pioneer. Not exclusively with the aim of acting as a role model but also with a view to securing its own interests and future economic success. Clean water and sustainable energy will become the most important raw materials on earth. And wine-growing is particularly dependent on them,” explains Bastian Mingers, Global Head of Wine & Spirits and Director of ProWein, and adds: “ProWein is committed to achieving the 2-degree target and wants to offer the industry a platform for exchanging experiences and knowledge to this end.”

Current Challenges for the Wine Industry

In the short term companies view the effects of the restrictive health policy with in part high tax rates and minimum prices made mandatory for wine and alcohol as the biggest challenge facing the wine industry. The less rosy global economic climate and increasing barriers to trade are considered as the second biggest challenge. The effects of a no-deal Brexit as well as the competition with other alcoholic beverages and the deregulated sale of cannabis are seen are comparatively negligible. 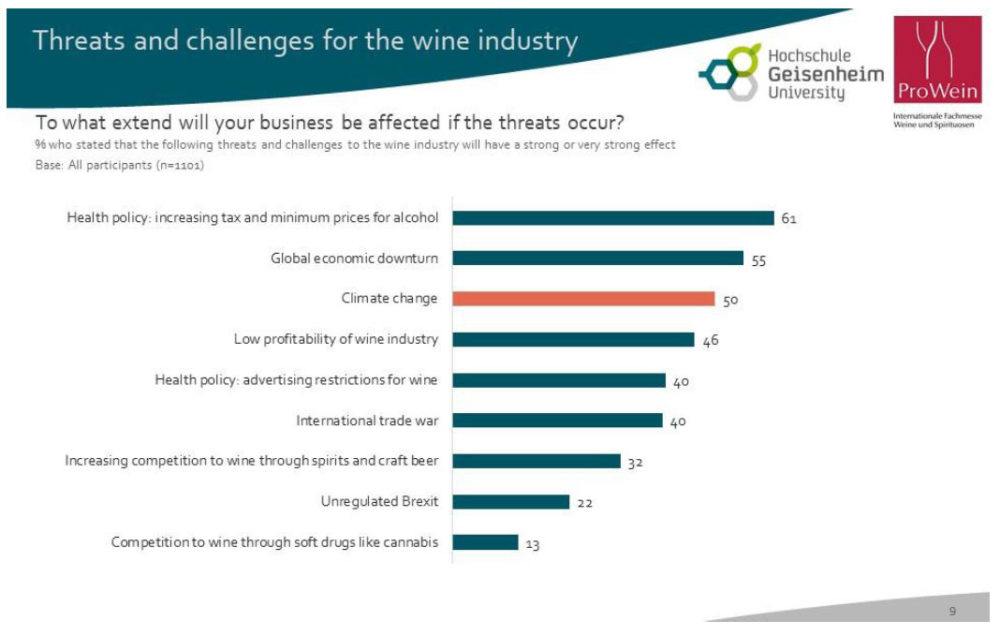 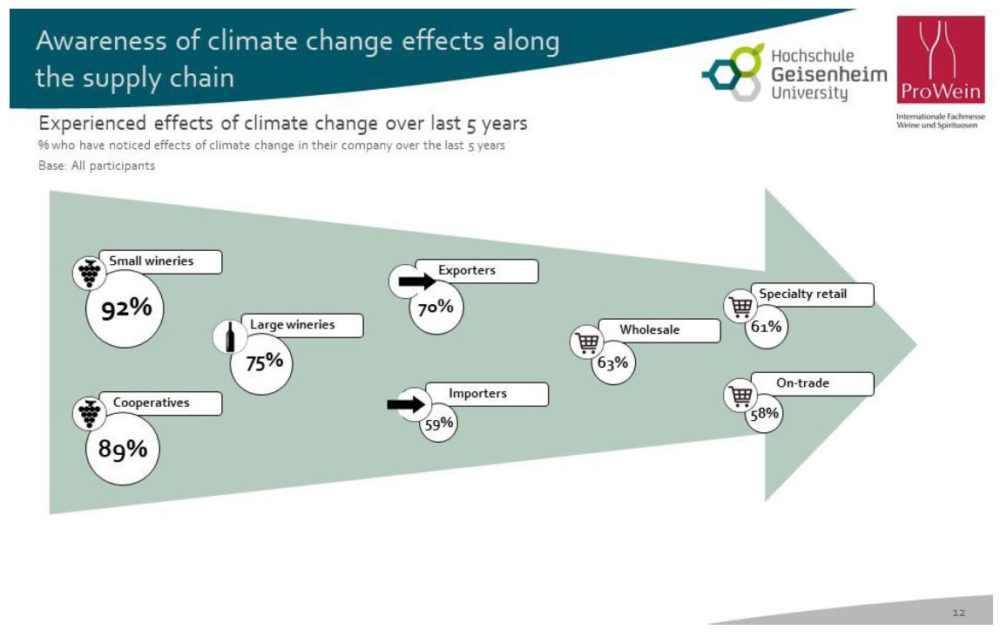 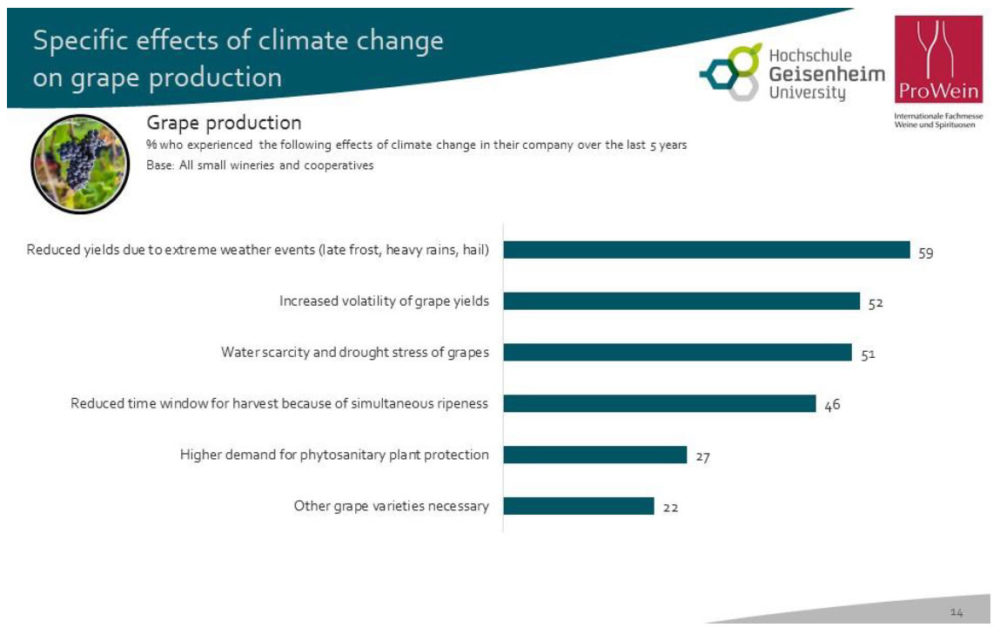 Over 40% of retailers plan to shift to other suppliers or countries of origin in future if their existing suppliers are affected by climate change. This will additionally aggravate the economic pressure on grape and wine producers who themselves have markedly fewer possibilities to shift.

Retailers are already now noticing climate-change induced changes in consumer behaviour. In hot summers, for example, wine consumption drops, and demand for heavy red wines dwindles. In future, retailers also expect demand for other wines (63%) and other beverages (47%) to go up. This means production and demand will develop in an opposite direction. Climate change means the production of heavy wines richer in alcohol and at the same time fuels consumer demand for lighter and more refreshing wines. More than half the retailers (57%) therefore urge producers to apply new oenological practices to come up with the existing wine profiles despite climate change. 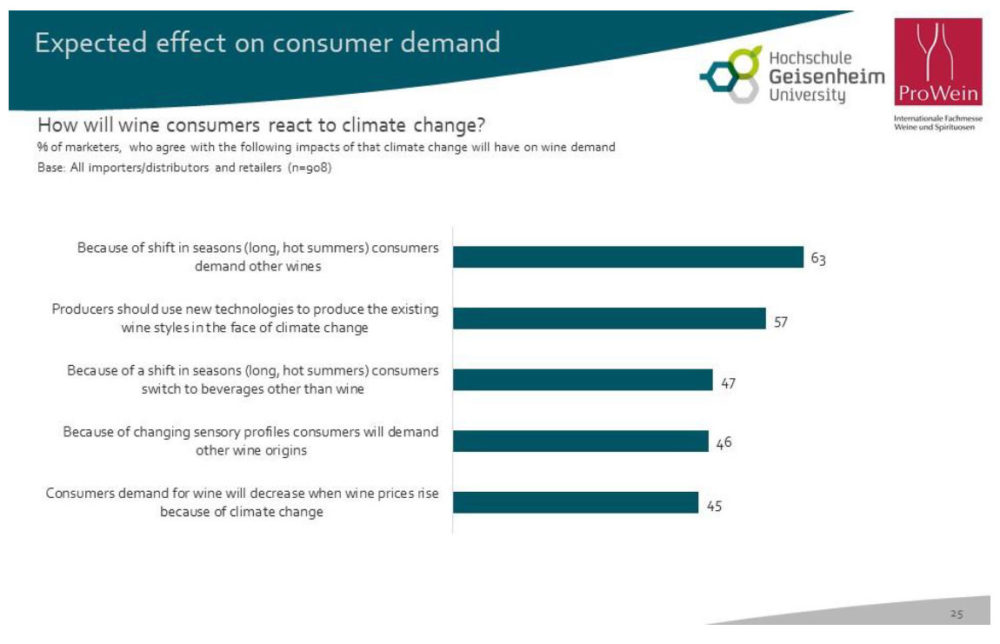 In line with the strong effects on wine growing observed, the adaptation strategies have so far focused primarily on viticultural measures and changes in harvest management. Irrigation was also introduced but often fails on account of high costs and limited availability of water. Since some of the adaptation measures in vineyards have reached their limits, the next planned steps are a change in oenological practices and grape varieties or root stock. A shift to other growing regions is not (yet) relevant to 45% of producers until 2030, but 27% have already undertaken such measures or plan to do so. Viticultural and oenological adaptations will in future also require more flexibility in the existing regulatory framework.

Wine producers regard reduced water and energy consumption as the most important adaptation measure. Saving water is an especially big challenge since the grape varieties currently grown require more water in the form of irrigation. Apart from the direct benefits for companies, water and energy savings also make a positive contribution to the sustainability of the industry.

The importance of sustainability 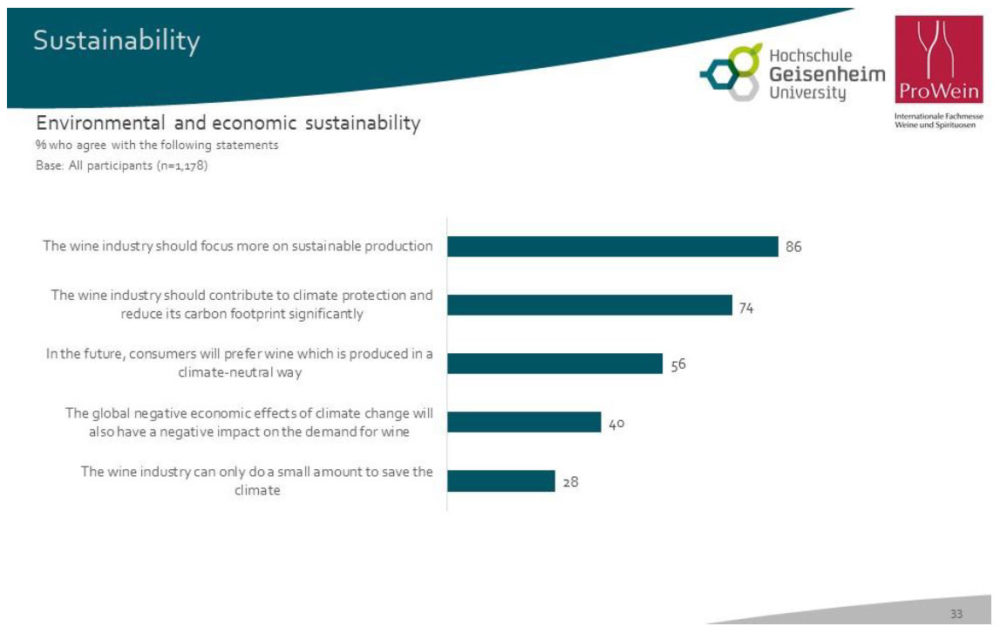 Only some respondents are optimistic that consumers will also prefer wines produced in a climate-neutral manner in future. Most optimistic are retailers in Scandinavia and Southern Europe (91%), while German producers at 38% are rather sceptical. 40% of players expect the negative economic effects of climate change to impact the demand for wine.

Polled on the current attractiveness of markets, exporters and wine producers rate Scandinavia with Norway and Sweden in the lead, as the world’s most attractive export market. These are followed by Japan, China, Hong Kong, USA, Canada and Poland. The slightly lower ranking of China and Hong Kong is based primarily on the high stocks and the slightly lower domestic demand there. The political unrest in Hong Kong has not been taken into consideration due to the timing of the survey. The USA and Canada were able to confirm their role as key export markets again, the effects of the higher import duties in force for most European wines from October 2019 remain to be seen. Poland has regained its position among the Top-7 export markets after 2017. Due to the continued lack of certainty over Brexit and its economic effects on the domestic market now already being felt by the rating of the British market has dropped again to another all-time low.

The economic situation of the wine industry

The economic challenges facing businesses due the slowdown in the global economy and trade barriers are also reflected in the expectations for economic developments in 2020. After the very large harvest in 2018 the market suddenly shifted from shortages to a state of oversupply, proving the higher market volatility. After price increases for the scarce 2017 vintage, in 2019 prices for bulk wine dropped markedly worldwide and stocks are still above average at the end of 2019. This double pressure of oversupply and a slump in demand is reflected clearly in the lower expectations of the various producers. Expectations are more stable on the part of exporters, importers, wholesalers and (to a slightly lesser extent) specialist retailers.

The study was carried out on behalf of ProWein by the Department of Wine and Beverage Business at Geisenheim University headed by Prof. Dr. Simone Loose and her team. ProWein and Geisenheim University look forward to continuing the success of the ProWein Business Report over the coming years. By publishing this report ProWein provides the wine industry with a unique market barometer for a long-term sample period and addresses key issues in the industry with annual focus themes. 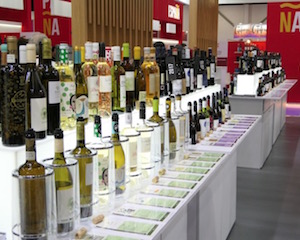 Event Notice on the Novel Coronavirus